Every morning as I leave for my walk, I pass by an old Atlantic Forest Tree resplendent with hanging tendrils, and moss. It is also blessed by the most beautiful yellow orchid that somehow always seem to be spotlighted by the sun as I pass. 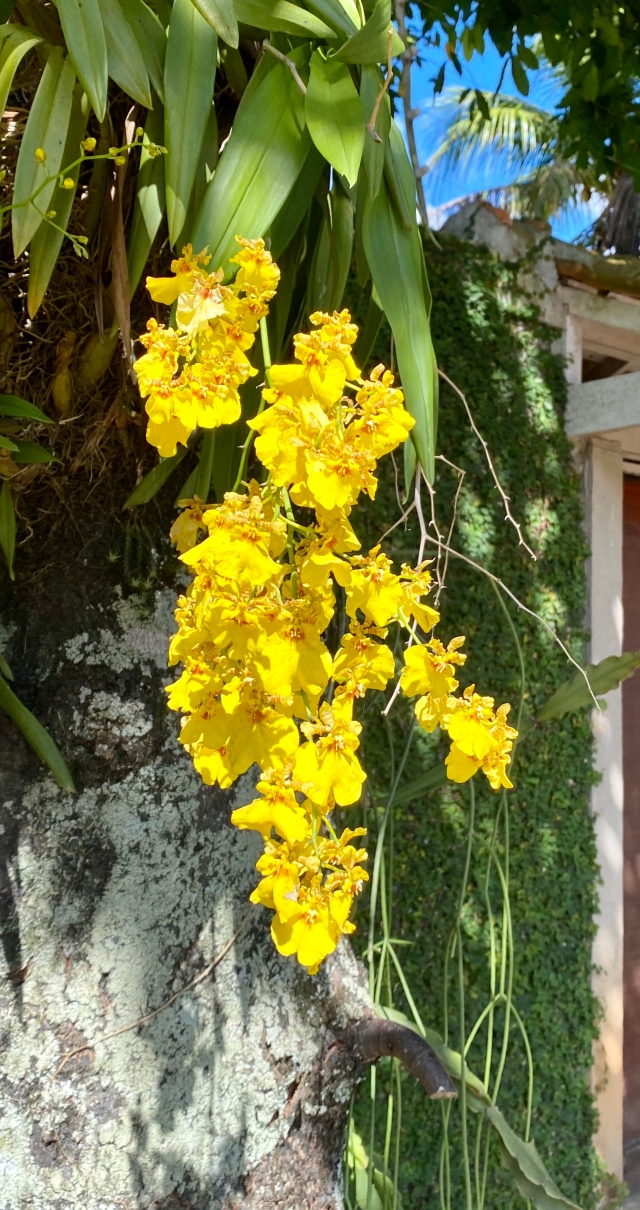 One of the blessings of the place in which we live is the abundance of beauty within our neighborhood. Both the Tijuca Forest and Pedra Da Gavea surround and border our neighborhood, both of which that I have written about in the past. Pedra Da Gavea is a work of God, millions of years old, and an old familiar face for me as I look onto it every day that I am in Rio. The Tijuca Forest is only 170 years old and comes from the hands of man as he reforested this area. As with my favorite mountain it is a familiar friend, I am greeted by it every day.

But as I was walking today looking off into the distance, I saw a dark rock outcropping that looked as if a huge block had recently been cleaved from it as it was jagged and lacked the smoothness time brings. To its left and highlighted in the sun was a waterfall spilling water into a crevice below.

I was amazed as many walks I had taken over the last few weeks. As many times as I have driven past this Devil’s Stone, I had never noticed these things. What was old and familiar became new again.

It made me pause, at least mentally as I needed to keep the heart rate up and see afresh the forest in which we live. There is something to be said for not seeing the forest for the trees. Missing the big because you are focused on the small. But there is always something to be said for seeing the large for its individual components. Staring up at the forest I could see that there were so many different types of trees. Dark green with long ovoid leaves; light green with fern type leaves; flowering trees with blooms of red, yellow and purple. If I looked hard enough, I could see the trees through the forest and it was a surprise to me that after all this time I could view something differently.

It made me think. Walking is good for that. How for most of the people I know our world has gone from being incredibly large to soul numbingly small. How the world used to be our oyster and we were now surviving on a diet of oyster crackers. How many of the social media posts I have seen over the past few weeks have spoken of boredom, tedium, and loneliness due to social of quarantine. I understand it as something I live everyday even though the home in which leave is spacious and beautiful when you are frightened to venture beyond its wall the world is very small.
It occurred to me that one way to look at the world these days, a way that would make the world bigger instead of smaller is looking at the trees in the forest. To focus on the detail and see the waterfall instead of the mountain.
Not everybody has a mountain in their backyard. Or a forest. But we all have neighborhoods. We all have things that we see every day. Perhaps by looking at our surroundings through reverse binoculars we can make our world big again.
Which is why when I returned to our gate, I spent a while getting to know our orchid. It was beautiful.